Every time ICOs are mentioned in relation to ETH pricing, people move in to battle formation. Some proclaiming that ICOs are destroying ETH, others claiming with zealotry that there’s “no proof” that ICOs are hampering the price of ETH.

ICOs are one of the key functionalities (currently) of the Ethereum platform (emphasis intentional), and the success and widestream adoption of dApps is likely to drive Ethereum (and cryptocurrency in general) into widestream adoption. Ultimately, ICOs may well be the ultimate reason for ETH hitting dramatic BTC-esque valuations. This does not mean that, currently, ICOs are not applying significant downwards price pressure on ETH.

This is something which significant number of the Ethereum community seems somehow unable to comprehend, so here’s a quick diagram to illustrate further: 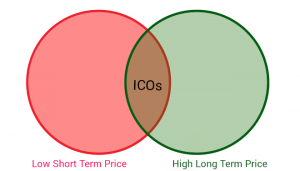 I really, really hope that I don’t have to justify why ICOs are justifiably in the right hand side (high long term price) of the venn diagram. I’m going to go ahead and glaze over the fact here that this is assuming companies do execute on what they’ve promised on, and also that the vast majority of ICOs are terrible. In principle though, I think we can all get behind the fact that the concept of dApps built on top of the Ethereum blockchain are good for ETH.

“Yes yes I know this already, but this just means that ICOs are great for Ethereum! We should give all our money to ICOs, then ETH will moon!” – Some jackass on /r/ethtrader, probably

The reason ICOs are causing downwards pressure on the ETH price? Simple, costs.

Unfortunately, for better or worse, it’s not possible to pay for the majority of goods and services with Ethereum. It’s not possible to pay your engineering staff, your phone bill, your office rent, or for your morning coffee. Yes, I know, some XYZ hosting company takes ABC-coin. But no, you cannot run a business without fiat.

Teams building dApps are going to need fiat in order to, you know, actually build the thing you gave them ETH to build. This means that they’re going to sell the ETH for fiat, in order to have money.

Money can be exchanged for goods and services

“But that’s stupid, if they build things then ETH will go up in price, so they should only sell a tiny amount and HODL the rest” – Some other jackass on /r/ethtrader, probably

How on earth do you think you can calculate a viable burn rate when the vast majority of your funding may increase or decrease by up huge amounts in value due to volatility? I’m not saying that ICOs will be selling every single ETH they raise, and the amount they’re selling will vary on the team and their plan, but you can bet that they’re not selling a little to pay the bills each month and hoping that ETH doesn’t tank in the mean time. And more to the point, if they are doing that, you may as well have burned your money anyway because the person running the team is an idiot. At least that way you have something pretty to stare at for a few minutes while it burns, maybe warm your hands a little, etc.

These teams will be liquidating enough ETH to give themselves a solid runway for development based on projected fiat costs at least, if not significantly more to remove the volatility in their funding. You want to try running a business where your financial position may be swinging wildly by millions of dollars each day? I sure as hell don’t.

So what does this mean for ETH?

Simple: Constant, significant, selling pressure on the market. For all the reasons outlined above, these ICOs are not trying to time the market, they’re not traders, they’re liquidating an asset they have been funded with in order to do what they do best – build shit.

I’m not saying they’re going to go and dump 10,000 ETH on Kraken without a second thought, but they’re definitely not going to hodl and hope the price goes up while their bills aren’t getting paid and they can’t make business projections.

But remember, while this is going to be a contributing factor to the lower current prices, these teams building the dApps may be essential for the growth and mainstream adoption of cryptocurrency — and that is what the long term value proposition of Ethereum is, a platform.

But before I leave, a word of caution.

Remember that nice pretty venn diagram from up above in the post? Well, in reality, it probably looks a lot more like this: 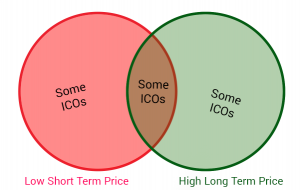 If you’re throwing huge amounts of money at ICOs which will not deliver on their long-term goals, and will liquidate huge amounts of ETH rapidly, then you’re ultimately applying downwards pressure on the market.

There are good ICOs and bad ICOs, learn to pick them, and stop throwing money at everything which promises to “disrupt” literally anything.