The last month has been rocky for Ethereum to say the least. After the ATH of $408, flash crash on 21st June which wiped out the entire GDAX order book caused by a multi-million dollar sell order, subsequent market crash of most of the crypto-space, EEA announcement all polished off by the $100M+ multisig Parity heist*.

This has seen huge, dramatic, volatility in Ethereum. With the recent block lock-in of BIP91 in BTC, the dramas and concerns of a Bitcoin crash upcoming to 1st August, BTC has received renewed interest from crypto-investors. A side effect of the huge gains in the last week have been a huge ETH->BTC trading influx as Ethereum investors jump aboard the Bitcoin bull-market hype train to ride it to (perhaps) a new ATH. 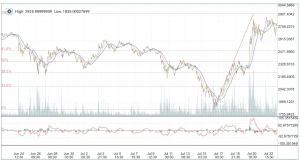 While BTC appears to have broadly plateaued around this new level near the ATH, the dramatic bull-run on BTC-USD seems to have settled down somewhat, stabilising approximately around the $2750 mark.

So what impact will this have on Ethereum? Firstly, despite the usual correlation between BTC/ETH, and BTC traditionally lifting the entirity of the crypto-currency space, correlative effects have been unusually weak during the recent bull-run on BTC after the lock in.

As previously mentioned, due to the increase in ETH->BTC trading volumes from cryptocurrency investors riding the BTC hype train, a significant volume of ‘crypto investment’ has been moved over to BTC. With the stabilization around the current price (and notably, failure to break the $3000 psychological-barrier mark), coupled with the de-correlative effects between ETH/BTC during these recent gains, I believe we will (shortly) see an influx of BTC->ETH trades as those who gained significantly from the BTC hype cash out to fiat (or back to ETH) before reinvesting in ETH before the correlative effects re-establish.

In addition, despite the previously mentioned EEA announcement there has been relative quiet from significant key partners included in the Enterprise Ethereum Alliance. These key partners add legitimacy to the EEA and Ethereum (and, the crypto-space in general) and I would expect an uptick in press releases from relevant companies over the coming weeks to drive investor confidence in ETH and cause price gain.

Finally, a note on ICOs.

I have not been one to make my views on ICOs quiet. If you’re giving millions of dollars to a whitepaper with no clear roadmap (and, importantly, plans for acquired capital) then you’re a fool and you deserve to be robbed. However, I have noticed a significant amount of negative attention from the crypto-space around coins ‘liquidating’ any of their raised funds by converting to fiat.

Converting ETH to fiat is giving these companies the money they need to drive development, in order to raise the value of their product and alt-coins (you know, that thing you bought in return for your Ethereum).

This is not to say that there aren’t a significant number of junk ICOs. There are. But ‘blaming’ every alt-coin and ICO for ‘damaging’ Ethereum is idiotic. These alt-coins and products built on the Ethereum network is half the point of the underlying protocol and is what will drive the price looking to the medium and long term.

I plan to write another post entirely tackling the issue of ICOs at a later point, but in the meantime, once a number of the most legitimate projects start to build out alpha/beta builds towards Q4 2017 and drive interest in the crypto-space, this will have a knock on effect driving the price rise in Ethereum too.

So my prediction? We’re about to see a medium price spike (undoubtedly followed by a correction) followed by a long, sustained, bull-run on ETH moving through Q3 into Q4 2017.

Hodl to your hats, ladies and gentlemen.

EDIT: A final note on the Parity heist. While this has short-term negative effects on the market, and was undoubtedly a monumental fuckup on behalf of Parity (and the various ICOs holding funds in a multisig wallet without auditing the code), these mistakes are going to happen. We will learn from them (and we’ll have to) but I don’t feel this is any reason to dampen fundamental belief in the core mission of Ethereum. At minimum, it’s going to encourage a lot more auditing of key Solidity code. Shout out to the WHG for securing the majority of the vulnerable funds.

EDIT2 (*): Minor revision note, approximately $30M in ETH was stolen by the blackhat hacker with the rest of the funds remaining in multisig wallets “stolen” by the WHG (to be secured from the blackhat and returned to the original owners once the contracts had been secured).