Considering the rapid trajectory of growth of Amazon.com, Inc over the past few years, many people I speak to believe that they’re likely currently overvalued and peaking on successive aggressive growth tactics. 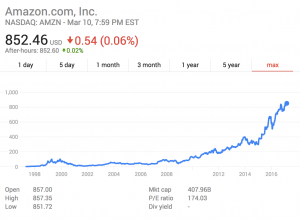 Considering the current growth since 2012, I can understand why some people feel the company is a good example of the ‘tech bubble’ – although I respectfully disagree.

My current position is long on Amazon, but for reasons differing from the majority of others I know holding long also. While I believe Amazon has shown great success as an eCommerce retailer (and I don’t think that business is going anywhere), I think that it is likely that their growth here will stagnate as they progressively dominate more of the market.

I think they have some interesting developments in the pipeline in this area (autonomous drone delivery, same-day delivery, drive to become a physical retailer) but still fundamentally believe their eCommerce business will stagnate as they grow.

So why long, you wonder? Simple, I believe Amazon are essentially now a utility company for the tech industry due to their huge presence of AWS [Amazon Web Hosting]. A recent AWS outage on the S3 realm (primarily) exposed how significantly ‘the Internet’ in general is now dependant on AWS hosting capabilities. There are other viable competitors (Azure, Google Compute Cloud) but AWS is dominating the market currently, and in all honesty I would adopt similar thinking to justify long positions in both Microsoft and Alphabet for the same reasoning.

By securing themselves as a utility provider for the tech industry, Amazon is becoming a necessary middle-man for the majority of tech startups – providing service to numerous unicorn valuation tech startups – and that’s even ignoring the significant services they provide to well-established blue chip stock companies, all of whom utilise technology as a vital underpinning of their non-tech businesses.

Sure, if I’m right, this position will take a while to mature, but if I’m right then the positioning will not be dissimilar to telecoms stocks in the mid 90s – except for hopefully, this time, no global market crash…